What's Wrong With Sockets Performance And How to Fix It

Socket API is a nice think which allows you to easily write network programs. But sockets have fundamental problem from performance point of view - they are asynchronous with network interrupts. And this is regardless whether you're using blocking or nonblocking IO.

Let's consider a multi-threaded application which is working with number of sockets and reads some data from them. Typically, it does following (pseudo code):

The polled socket could be either blocking or non-blocking socket. Let's forget about the buffer copying for a moment and concentrate on what's happen with arriving packets. 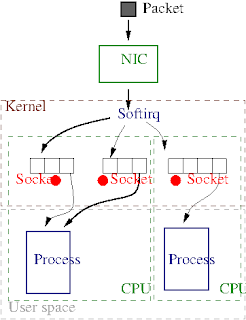 The figure depicts two processes (there is no difference between processes and threads in our discussion) which reads from three sockets. The processes are working on different CPUs. Probably Receive Flow Steering (RFS) is used so packets designated for the first process go to the first CPU and packets for second process are processed by softirq at the second CPU. Each socket has a receive queue where incoming packets are placed before reading process consumes them.

If we look at the code sample carefully then we find two system calls, relatively slow operations. The process also can be rescheduled and/or preempted between the syscalls. So if the process is waked up in epoll_wait() call by a socket event (when the socket gets a packet) then it reads data from the socket with some delay. There are a bold arrow between the second socket's queue and the first process which depicts reading a data from the socket. There are two complications:
The problem is that when the process goes to treat the packet, softirq can read other packet (a lot of packets actually, see a bold arrow from softirq to the queue of the first socket at the figure). With packet lenght from 64 to 1500 bytes for common Ethernet link it's obviously that the packet, which is reading by the process now, could not be in CPU cache any more. The packet is simply  pushed out by other packets from the CPU cache. Thus ever with using zero copy networking user-space applications can not achieve good performance.

For example sk_data_ready() is called when a new data received on the socket. So it is simple to read TCP data synchronously in deferred interrupt context. Writing to the socket is bit more harder, but still possible. Of course, your application must be in-kernel now.

Let's have a look at simple example how to use the hooks for TCP data reading. First of all we need a listening socket (this is kernel sockets, so the the socket API is different);

sk_state_chage() is called by Linux TCP code when the socket state is changed. We need a new connection established socket, so we need to handle TCP_ESTABLISHED state change. TCP_ESTABLISHED will be set for child socket of course, but we set the callback to listening socket because the child socket inherits the callback pointers from its parent. th_tcp_state_change() can be defined as:

And here we set other callback, but already for the child socket. th_tcp_data_ready() is called when a new data is available in socket receive queue (sk_receive_queue). So in the function we need to do what standard Linux tcp_recvmsg() does - traverse the queue and pick packets with appropriate sequence numbers from it:

The function should be more complicated to properly handle skb's paged data and fragments, release the skb, more accurately process TCP sequence numbers and so on, but basic idea should be clear.


UPD: You can find source code of the Linux kernel synchronous socket API at  https://github.com/krizhanovsky/sync_socket .
Posted by Alexander Krizhanovsky at 2:23 PM 9 comments: