How To Analyze Performance of Your Program


Define the Reference and the Target

The first thing to do is clearly define what "fast" means for your program. Probably you have business requirements like "the software must process at least 50,000 reqeusts per second (RPS)". Or probably you reference some existing software, e.g. "be as fast as the Competitor's solution".

Why the tests usually can't show real performance? Just because real workload you'll face very different use cases. For example for Web server in real deployment you see various DDoS attacks, users with old and/or RFC incompatible Web browsers, very different robots from Web search engines and many many other clients. Usually it's just impossible to emulate all the use patterns in tests.

Thus, we're defining very reduced set of test cases, or benchmarks, to analyze performance of our software in particular use cases. For example we can define following benchmark scenarios:
One of our client, a VPN vendor, knew their bottle neck - it was hard for them to scale single heavyweight TCP connection among many CPU cores for encryption. So the analysis case for them was exactly to pass one, as large as possible, TCP connection through the VPN agent and process it as quickly as possible using all available CPU cores. So knowing or assuming a priori bottle necks of your software is very useful to define good test case for benchmarks.

One other example could be business requirement. Very useful requirement is to show performance results as high as possible, but without cheating (e.g. without using jumbo frames). Usually the requirement arrives from marketing department since the guys must show where the product outperforms competitors. In particular you choose any benchmark test which is the most promising for your solution and do fair performance tests.

In our example test No. 4, rate limiting clients blocking, is exactly the case. Any modern user-space Web accelerator runs rate limiting on application layer, e.g. if Nginx rate limits a client it still has to accept TCP connection from the client, read and parse the request and only after that limiting modules get control and block the request. Meantime, Tempesta FW directly passes blocked IP addresses to IP layer and all following requests from the malicious client are immediately blocked at IP layer (you can find details from my presentation - it's in Russian, but the slides are in English). This is unique feature were the solution shines and performance results will just clearly show that. 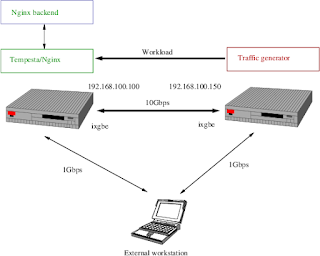 The last preparation step is definition and setting up testbed. The testbed configuration is crucial since it must emulate real life use case. Meantime, testbed must be able to explicitly show the software performance. I'll describe hardware and configuration issues with testbed setup at the below.

In our case we're using testbed configuration as depicted on the figure. There are 2 servers: one to run Web server perfromance measurement tool and the second one to run Web accelerator, Tempesta FW or Nginx in our tests. Each server has 8 CPU cores Intel Xeon E5620 (very old processor) and the servers are linked using 10Gbps Intel network adapters. Nginx backend is running on port 8080. Tempesta FW uses port 80 and Nginx as Web accelerator uses port 9000.

Note that we use Nginx backend (upstream) on the same host as analyzed Tempesta FW or Nginx as Web accelerator. While 3rd machine running the backend server looks more practical, it's undistinguishable from running backend on the same host in our test scenario because we use single page Web content which is cached by Web accelerator on first hit. Testing Web cache requires large Web content, such that the Web accelerator constantly evicts some cache entries and fetches new ones from the backend server. So more network I/O is introduced, probably disk I/O in Nginx case and surely cache eviction algorithm. This is relatively complex topic which merits its own benchmark and independent analysis. We'll do this for Tempesta FW in future. Meantime I want to share interesting Nginx vs Varnish performance study from BBC which discusses complex topics in the Web accelerators performance.

So far so good, let's start banchmarking. ApacheBench (ab) is the first tool which Wikipedia mentions, so let's give it a try. We can make following simple run against Nginx as the first try (all senseless output like the tool banner is skipped for brivity):

One request took 69ms while others are within 1ms - too big difference, what's the reason? The answer is simple - the cache. To service the first request Web accelerator must transfer the request to the backend server and when it receives the response, it sends the response to the client and caches it. All following requests are serviced directly from the cache. So if you don't test caches, ensure that all the caches are properly warmed up before start of real benchmark. As it was mentioned before, we don't test cache, so I send one request to Web accelerator before each benchmark. Also keep in mind that caches can stale, so I use proxy_cache_valid any 30d for Nginx configuration to make sure that there is no cache invalidation during the tests. Actually there are many different caches which can affect results of benchmarks. E.g. CPU cache plays significant role in Intel TSX benchmarks. So rule of thumb is to make a test run before the actual benchmark to warm all the caches.

Now caches are warm and we can start real measurement for concurrent sessions (several output lines are skipped as they're the same as for previous run):

Only 4783 RPS for Nginx on 8 core machine? Yes, and that's just because ab can't produce more load, it's essentially the bottleneck of our installation. If you run top -b  -p `pidof ab` -n 10 on load generation machine, then typically you find something like:


The problem is that ab is unable to use more than one CPU core. If you need more workload, then you have to run many ab instances in parallel and merge their results somehow.

So it has sense to try other popular HTTP benchmarking tool, wrk, which is able to generate load in many threads. Running wrk in 8 threads (equal to CPU number) gives us much better results:

17KRPS isn't so impressive results for Nginx on 8 core system, right? So the next step is to tune operating system and reference program to get more performance, such that our performance comparison becomes fair. There are many resources in Internet about Linux and Nginx performance tuning, e.g. Tuning NGINX for Performance. Also this Linux Web Server Performance Benchmark can give you an idea how to properly setup the system and which numbers you should expect from the benchmarks.

The previous results were for default Debian Nginx 1.62 configuration with almost 1KB index.html content. So I downloaded Nginx 1.11.3 which introduces performance improvements, replaced original index.html by "0123456789abcde" (16 bytes including trailing '\n') and used the same sysctl settings as in the benchmark mentioned above:

So now we dramatically increase our results to almost 95KRPS for HTTP Keep-Alive connections:

And 17KRPS for "Connection: close" requests:

So now we have data about performance of reference system and now is time to measure performance of our program. Comprehensive performance benchmarks, covering all the mentioned test cases, are complex and too large. So I use only 3, probably the most notable, of them. All the tests are run for 1, 8, 64, 512, 2048, 8192 and 32768 connections and use the same 16 byte index.html. 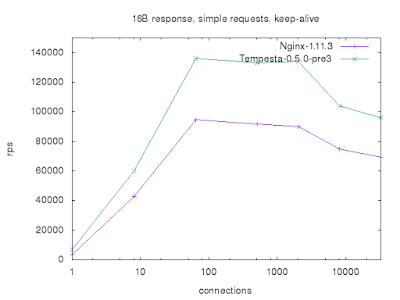 The second test adds 'Connection: close' header to the requests: 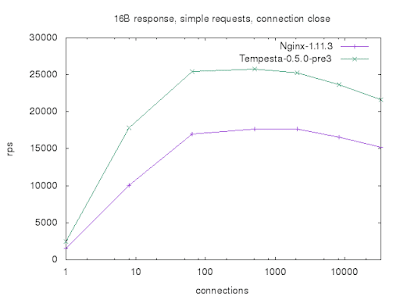 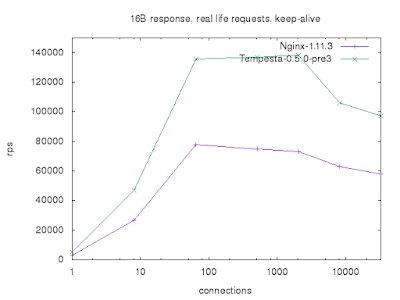 The plots show that we beat a user-space Web accelerator in 2 times at most and like 1.5 times only in average. Does it mean that we did poor job and didn't reach our targets? Not at all. Let's understand the results and figure out the next steps.

As the first step let's see top output for Nginx server. It shows

for small requests and keep-alive connections or

for real life requests with keep-alive connections. In all the cases traffic generating machine is idle for about 15-30%:

for real life requests and

for small requests. Note that in the last case 94% of CPU is idle, i.e. Tempesta FW uses only 5% of CPU to process almost 140KRPS! That's not bad at all. By the way, Tempesta FW works fully in softirq context, so this is why we see from the top output that CPU runs in softirq only.

And now let's have a look at traffic generating machine:

So now the traffic generator is the bottle neck again. This is why we could not show results better that x2 times faster than Nginx. So this time to cause more load onto our Web accelerator we need much stronger hardware to generate more HTTP load. However, if we simply increase number of CPU cores that doesn't change results for small connections number, like 1 or 8, because only a few CPU cores are able to generate the load. To show the best results for small connections number we need to use much more productive machine in single CPU core loads.

Ok, having more power hardware to generate HTTP traffic we can show numbers in 5-10 times better for keep-alive connections and small requests. However, our top results for real life requests weren't so promising: we ate almost 60% of CPU. So this is the point for improvements.


So the bottle neck is HTTP parser, actually known issue.

I didn't measure 4th case, rate limiting clients blocking. While the test is very notable, it's not easy to do it properly. The reason is that traditional Web server performance measurement tools like ab or wrk can't measure how many requests or connections were blocked, just how many of them were processed. To address the issue we're developing our own benchmark tool, tfw_bomber, which "bombs" Web server by normal as well as malicious request and is able to measure blocked connections and requests. I'll describe the tool in upcoming articles.
Posted by Alexander Krizhanovsky at 4:20 PM